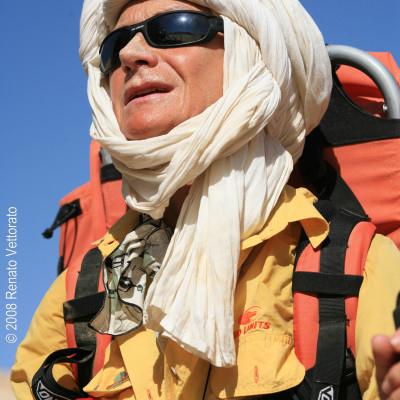 Carla Monnosi Perrotti, Milanese, resident in San Felice (Segrate), has turned her passion for sport and travel into her career, dedicating her whole life to exploring the wildest places in the five continents and bringing back spellbinding accounts in her photography, documentary films, articles and books.

She is a niece of Raimondo Bucher, holder of the world’s first free diving record and has practised and competed in numerous sports, achieving impressive results in skiing and athletics. Carla is also an assistant diving instructor, but she is best known for being the first woman to cross vast deserts in (5 in 4 continents) on foot and alone. Many of Carla Perrotti’s adventures are described in two books, published by Corbaccio.

The first, “Deserti”, is now in its 9th edition, while the second, “Silenzi di Sabbia”, was published in 2007.
Both books have also been published in German, as part of the National Geographic collection.

In 2011, she published a third book, “Lo sguardo oltre le dune" written with Fabio Pasinetti, a sight-impaired sportsman with whom she crossed the Egyptian Desert, which went on to win the Contardo Ferrini Literary Prize in 2012.

After years spent travelling through the planet’s wildest, remotest areas, her ambition remains to introduce the desert to people.

“The impossible is only within us...” - Carla Perrotti