Carie (“cavity”) is a hole made by a woodworm that responds to the name of “climbing”.
Carie is what remains of the degeneration process of a tissue, in this case of a place.

Carie (“cavity”) is a hole made by a woodworm that responds to the name of “climbing”.

Carie is what remains of the degeneration process of a tissue, in this case of a place.

These two concepts summarize this project, which has its roots in the immense reservoir of inspiration which is climbing. Its purpose is to observe an apparently distant place, in contrast with the natural beauty and find its own "beauty" through climbing. We have used this discipline as a way of interpreting these spaces.

Carie is not an investigation, nor a complaint or a position but a look at that world by a group of climbers attracted by the aesthetics that these places have, by their history and their contradictions.

How did it all start?

Carie was originally born from a photo shoot project for Ferrino & Rockslave, organized by Marzio Nardi together with Achille Mauri and Federico Ravassard at the Carrara marble quarries.

A project that start as a sport vision soon swithces focus, showing the environmental side of this wounded territory, the Apuan Alps, mountains that are no longer mountains because destryed by commerical mining.

From here the idea of Marzio, Achille and Federico grows and doesn't limit itlsef in just taking pictures, but giving voice to a territory and a community.

Above all, they study the relationship between the mountains, verticality and obstinacy, which represent's the soul of these places, somehow bringing us back to the soul of climbing.

This is how forgotten spaces become theater for new gestures that follow the linearity of the shapes between cracks and quarry cuts, and evrything that sorrounds them.

What's the concept behind it?

Marzio: It is a project born many years ago from my obsession to give life to these spaces where emptiness and often abandonment reign. Slices of landscape that man has exploited and then abandoned which for me retain a strong attractive power. For these places, which are nothing more than wounds in the mountains, climbing can be the cure. The magnet that attracts creativity. We interpreted the lines without digging holds but climbing on the existing ones that man had dug for other reasons. This was the way we got involved. Adapting to that space without altering it but using the means that climbing gives us: ropes, carabiners, pitons and friends. I would like to remind that this was a project that I would have liked to accomplish with Adriano Trombetta, with whom I had imagined it. Unfortunately “The Mountain" took him away.

Who are the people behind Carie?

Marzio Nardi. I’ve been a climber for 35 years, I was one of the first Italian sport climbing champion, but very soon I left competitions to pursue creativity through climbing: to look for places to nail, to trace competitions, to sculpt holds, to film. Telling climbing and how it manifests itself in its most varied forms. In 1997, with the Bside I created one of the first climbing gym in Italy.

Achille Mauri, I was born in Lecco not so many years ago. I have been going to the mountains since I was little thanks to a solid family tradition, and through my work as a videomaker/photographer I try to analyze the relationship between man and the environment in all its forms. Carie was for me a union between ethics, aesthetics and “athletics".

Federico Ravassard, 25 years old from Turin. I told my grandparents that I am a photographer, but in fact photography is only one of the means by which I try to tell something. Nowadays I’m mostly working in the world of outdoor sports, although I have not yet understood what I would like to do when I grow up.

You’re 3 climbers, what kind of climbing do you like the most and what don’t?

Marzio: What I like most is its lack of boundaries. The possibility of shuffling the cards and doing something new or at least different every time. The possibility of carrying this gesture everywhere giving new meaning to things. I can't stand the risk of stereotyping things, a risk that climbing is also undergoing, and then I could't stand tight shoes anymore.

Achille: I have no particular predisposition towards a specific climbing style. I love the environment in which it is practiced and I feel lucky having the opportunity to change it from time to time.

Certainly quarries have opened a fourth dimension in me, for better or for worse.

Federico: I personally like to vary as much as possible: sport crag, trad, great climbing routes and gym when I'm in town. I have no particular preferences, sometimes what makes the difference for me is the time of year. One aspect of climbing that does not drive me crazy is, unfortunately, the "cultural" impoverishment in the last years of indoor climbing, a world that has started to be frequented by people who have more to do with crossfit and do not seem particularly interested in the rock.

What did you face while filming this project?

Achille: First of all, there have been two kinds of filmic approaches to this work: a purely "sporty" one, focused on the athletic gesture of climbers and their harmonious interpretation of the lines. The choice of the shot was extremely determined by the aesthetic beauty and how it appeared through the lens. At that point a sort of silent complicity was set off between us and the climbers, interrupted only by: “Is it good or shall we do it again? Let's do it again... ". Our time spent on the wall was equivalent to theirs, excluding those times that "Tuono Blu" (the nickname of Roberto Gianocca, the “drone pilot") flew through the Tuscan skies.

The second approach, however, was much more in a documentary style. The people we involved and therefore listened to were chosen only by us, through a natural selection. We have been curious since the beginning, in my opinion not too omniscient, but this is up to the public to decide.

How strongly can a sport like climbing denounce strong environmental issues?

Federico: Compared to other disciplines, climbing has the double advantage of being intrinsically linked to the territory and of being easily understandable to an audience of non-experts if told in the right way that certainly is not the one of sports performance, and this was demonstrated by the cross-cutting success of Free Solo. Carie's idea is to use climbing as a honey trap, attracting the public through action scenes and then dealing with more serious topics, for example quarrying. The outdoor audience is basically very attentive to environmental issues, you just have to find a way to capture its attention and this sport lends itself very well, like a sort of infotainment.

How much and in what way can sports, especially outdoor ones, influence and help the planet? And how much does it make it possible to sensitize people who have not yet dealt with the topic?

Federico: Historically, sport has already shown that it can influence politics and society, just think about Tommie Smith and John Carlos’ actions at the '68 Mexico Olympics or, more recently, about Putin's influences in the Russian Olympic system or the story of Colin Kaepernick. It is a global language, which lends itself well to diffusion through a transversal audience. In the case of outdoor sports, then, the message is strengthened thanks to the spectacularization of the environment in which the practice takes place.

For some time now it seems that all brands are concerned about environmental issues, reality or marketing?

Federico: Certainly for some brands green issues are a trend oriented to obtain benefits in terms of revenue, just as a certain attention to the female audience had been a couple of years ago. At the same time, however, there has been recently a collective awareness that make sure that brands, in order to be appreciated, must absolutely meet certain requirements of environmental sustainability. The same goes for consumers, who are now targeting their purchases in a more specific way, so that’s good. Of course, then this philosophy should also be applied outside the outdoor world, which in itself is truly small.

Carie will continue its journey at some European film festivals and will soon be available on the big screen.
Here’s the teaser. 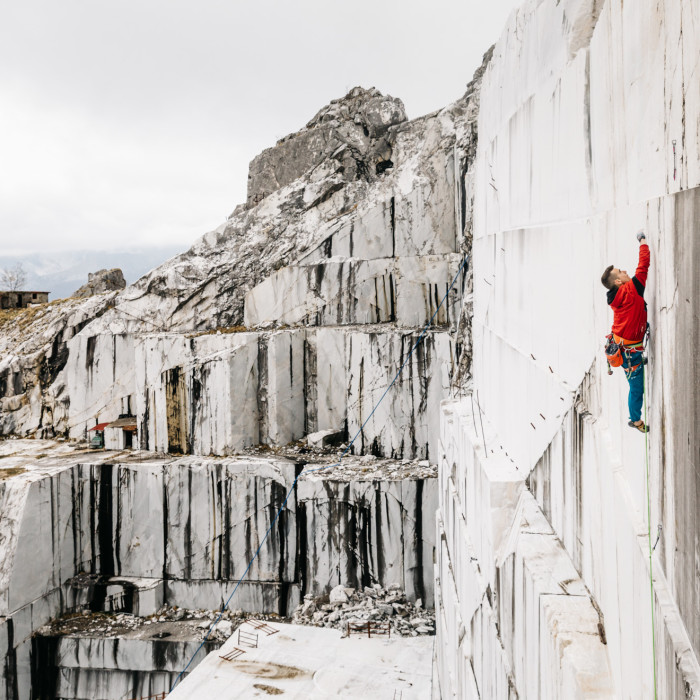 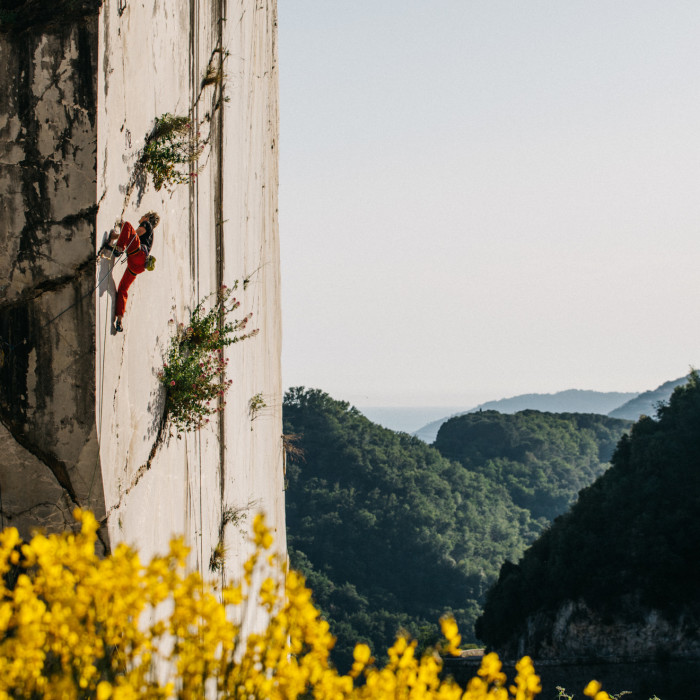 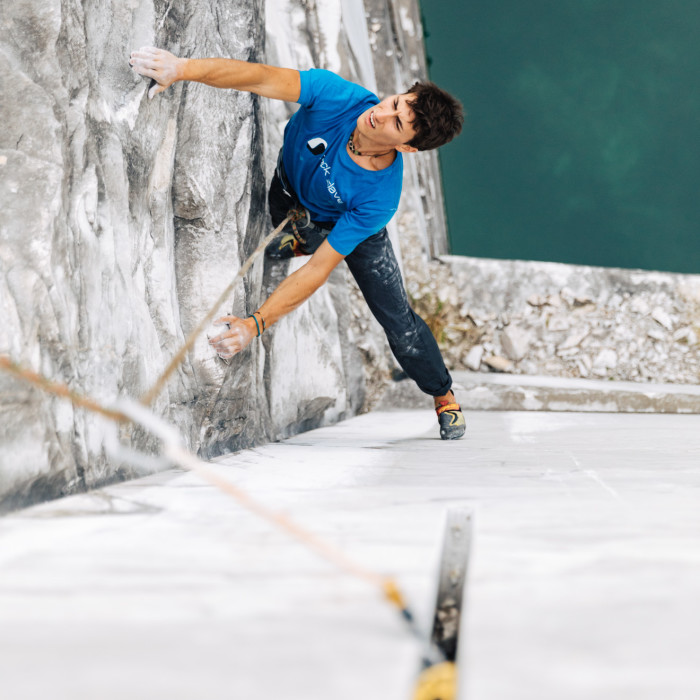