AT THE BORDER BETWEEN ORDER AND CHAOS

KINNAUR HIMALAYA, AT THE BORDER BETWEEN ORDER AND CHAOS

“Kinnaur Himalaya, at the border between order and chaos” is an experience and the result of many years of research, conducted by Emanuele Confortin with a journalistic and ethnographic aim. It is set in a tribal context, in Kinnaur (and Spiti), part of the Indian Himalaya, within a little-known community but affected by climate change, migration, cultural contamination and, similarly, from the seductions of one of the most vibrant economies on the planet.

The aim of this project is to propose an overall overview which is necessary to frame this Himalayan district in its own cultural, environmental and geopolitical context. The Himalaya, a huge mountain ridge in the heart of Asia. Place of borders and disputes. It is a land threatened by climate change, where start the course of the great rivers important for the survival of hundreds of millions of people, thickened in the most populated continent in the world.

“Getting to know the Himalaya means knowing Asia,” suggested a twenty four years old journalist who arrived in Kinnaur after a twenty four hours bus ride from New Delhi to “take a look” at the large dams being built in the Sutlej river valley. Probably true, the Himalaya is the mirror of Asia, but during my fieldwork I confined myself to a part of the territory, to Kinnaur and Spiti. I do not intend to propose any truth, I merely report what emerged from a long personal and professional experience, and from an even longer later revision. Starting from the micro to frame the macro.

Let’s try to frame the project, from a testimony of its author, Emanuele Confortin.

THE ORIGINS OF THE PROJECT

I left for the Kinnaur in autumn 2003, knowing little or nothing about this remote strip of land in the heart of the Indian Himalaya.

The idea of the Kinnaur came out almost by accident, in the fall of 2001, while I was going through some magazine’s pages found in a tea shop in New Delhi. The now faded article described a wild and uncontaminated region, inhabited by the Kinnauri, a tribal group that practiced an archaic religion. In the few lines regarding the district, there were all the elements I was looking for: “remote territory in the heart of the Himalaya”, “not yet affected by mass tourism”, “priests possessed by divinities”, “exorcisms, trances, demons, celestial musicians”. The choice to reach that region took shape at that time. I decided to spend some months of my life there, probably the most important ever.

The notes I left on my notebooks at that time fix my arrival in the area on September 16th 2003, after a week of travelling. Once arrived in Kinnaur, I set my base in Kalpa, a village nestled on a sunny valley at an altitude of 3,000 meters. The inhabited area rises in the central part of the district, in front of the Sutlej river and of the great Kinner Kāilash, the sacred mountain of the Kinnauri. I still didn't know what to expect from that place. Day after day, I would have fallen into the rhythms of the village, getting in touch with an ancient culture, light years away from the West I left behind, but still not so immune to the effects of globalization. I would have listened to the sacred hymns at the temple of the village; seen the black braids of the processional palanquins of the gods swinging; drank strong gulps of rak, the ritual wine, poured by priests directly into my hands; observed the spirited gaze of the grokch, the oracles, during the trance; run frightened in the dark, confused between reality and suggestion trying to escape the demons that everyone was talking about; and then taken in an exorcism.

The work done on the Sino-Indian border led me to live among the migrant pastors arriving from Nepal; to overcome the “perfect storm” losing for a shelter at the Ki Gompa, one of the most important Buddhist monasteries in the Indian Himalaya. Then there were the endless journeys on buses of the Himachal Road Transport Corporation, real tin cans balanced on tires smoothed by the roughness of the ground. And then the high-speed marches on the Apita Valley, where several hundred people live twelve months a year in some of the highest villages in the world.

Fifteen years after leaving for the Kinnaur (in 2018), rereading the notes from that time, going through the photos took in Kalpa, Roghi, Chitkul or nearby Spiti, I realized that the investigation of an archaic tradition like the kinnauri one must be contextualized. I cannot disregard the social, environmental and geopolitical component that characterizes this corner of the Himalaya. The work carried out in the field would be sterile if it were released from the lived human experience. For this reason, after the experiences of 2003 and 2005, I returned to Kinnaur, exactly fifteen years later, with the maturity of an (almost) forty years old man and the point of view of a journalist, in love with field work.

After more than two and a half months in Kinnaur and Spiti, in November 2018, I went back to Italy with the same impressions as the first time, aware of having lived a unique experience. Even in 2003, after the “first" Kinnaur, my life had changed. Staying alone, for so long, in the Himalaya is enough to undermine your convictions, or at least, imposes you to question the prevalence of the culture from which you come from. “There's more out there and it deserves to be known” was one of the first and most important lessons I learned from the Kinnaur experience, since the first trip. So simple and yet so strong in its real intentions that conditioned my future choices, at least the professional ones. As a young student I felt that the world I came from was losing the opportunity to admit the existence of different perspectives; neither better nor worse, simply distant, “something else”, and for this reason worthy of being known.

Now, in 2019 my experience have been printed in a book titled "Kinnaur Himalaya, at the border between order and chaos”. This long deep inside Indian Himalaya region is a self-produced work, distributed through direct circuits.

Emanuele Confortin's 2018 expedition was supported by Ferrino among others. For information on scheduled dates and cities, or to buy a copy of the book, you can write to info@indika.it 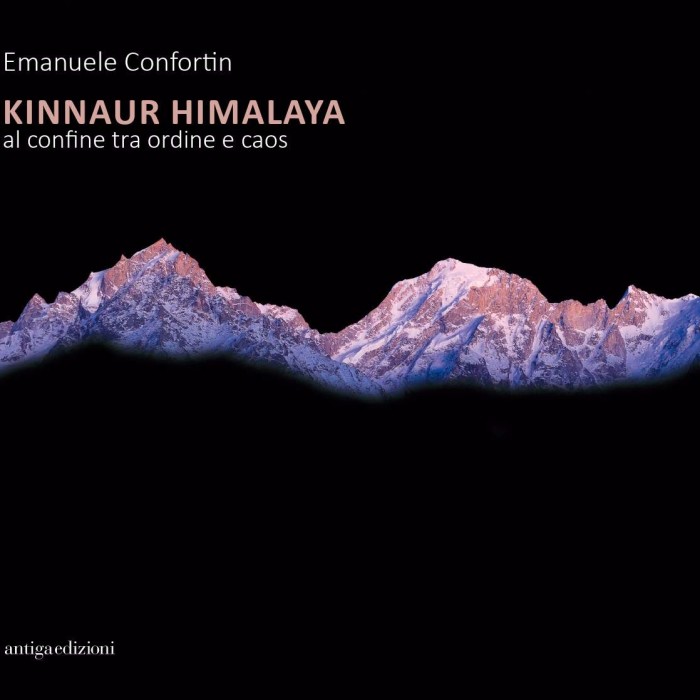