“Linea 7000” is a project that aims to show how all of our mountains and trails are easy to reach using public transport. The project, which comes from an idea by Gian Luca Gasca, promoted by the Club Alpino Italiano [CAI - Italian alpine club] and supported by Ferrino, focuses on the route of the Sentiero Italia CAI [the Grand Italian Trail], the world’s longest trekking route, which crosses the Alps, the Apennines, and also the mountains on Italy’s two largest islands. It is a long itinerary that can also become an opportunity to discover Italy in a conscious manner, with a low impact on the environment. The first stage of Gian Luca’s journey takes us onto Europe’s highest volcano: Etna. Let's take a look at how to reach the trail using public transport.

How to get to Etna

Trains to Catania, the city at the foot of Etna, leave Rome every day. The journey time can vary from 9 to 11 hours. Alternatively, there are direct flights to Catania or Palermo. There is a frequent regional train service from Palermo to Catania.

There are various means to reach the trails on Etna using public transport. The Ferrovia Circumetnea rail service departs from the centre of Catania, taking you to Randazzo in just over two hours, which you will spend with your eyes glued to the windows with their views of Etna on one side and on the other, of the pistachio plantations as far as the eye can see, to the rolling slopes of Nebrodi and Madonie.

Alternatively you can take a bus to the trails on Etna. The first bus leaves Piazza Giovanni XXIII at 8:15 arriving at the Sapienza refuge at 10:15, leaving you all the time to enjoy a hike on the volcano or along the Sentiero Italia. For the return journey, a bus departs from Sapienza at 16:30.

Another choice is to take a bus to Zafferana Etnea, on the south-east face of the volcano. This beautiful village is just a short walk from the section of the Sentiero Italia CAI that crosses the Valle del Bove, a natural basin with a lunar landscape, on the eastern slope of Etna. The bus service runs frequently, from 7:00 until 20:30, and the journey takes about an hour. The same applies for the return journey.

After crossing through the centre of Randazzo, which is also worth a visit, the Sentiero Italia CAI proceeds southwards. The first few kilometres are over road, but it is still possible to enjoy the uniqueness of the views offered by the slopes of Europe’s highest volcano. The fertile slopes of the volcano have allowed a flourishing agriculture to develop, and well-kept plots of land that form the backdrop to the start of the trail.

Following the asphalted road, you will soon come to a fork marked trail no. 716A, which you should ignore, keeping to the left along trail no. 716. This is where the asphalt surface ends and the dirt track begins. It immediately feels strange underfoot because, in place of the soil, you will be treading on the noisy lava ash produced by Etna’s many eruptions. From here, the trail continues gently upwards to the slopes of Monte Spagnolo, to reach the part where it joins Pista Altomontana (trail no. 701), which continues up to the right. From here, the route proceeds easily, with slight ups and downs leading to The Forest Bivouac on Monte Scavo. The building is not managed but it remains open all year round, and offers plenty of room as well as a fireplace. There is plenty of wood all around to build a warm fire for the night.

From the Forest Bivouac on Monte Scavo, follow the Altomontana trail to the south. The path starts on an immediate, but gentle climb. In just a short time, still keeping Etna on your left, the route takes you up to a cave, the Grotta di Monte Nunziata (also known as Grotta delle Vanelle), a cavity created by the lava flows. A long upward stretch will take you up to Passo di Monte Palestra (1932 m), at the foot of Mount Palestra. This is the highest point of the whole Sentiero Italia CAI around Etna. From here, a long descent takes you down to the Rifugio Giacomini refuge, then to Piano Vetore, where the asphalt surface starts again. Just a short way along is Via Etna, which the trail cuts across in several points, avoiding the hairpin bends. Keep following the red and white circles marked “SI”, the trail continues its ascent in the direction of the Sapienza Refuge (1909 m), a genuine icon of Etna. The last section, which is about 400 metres long, is also asphalted. 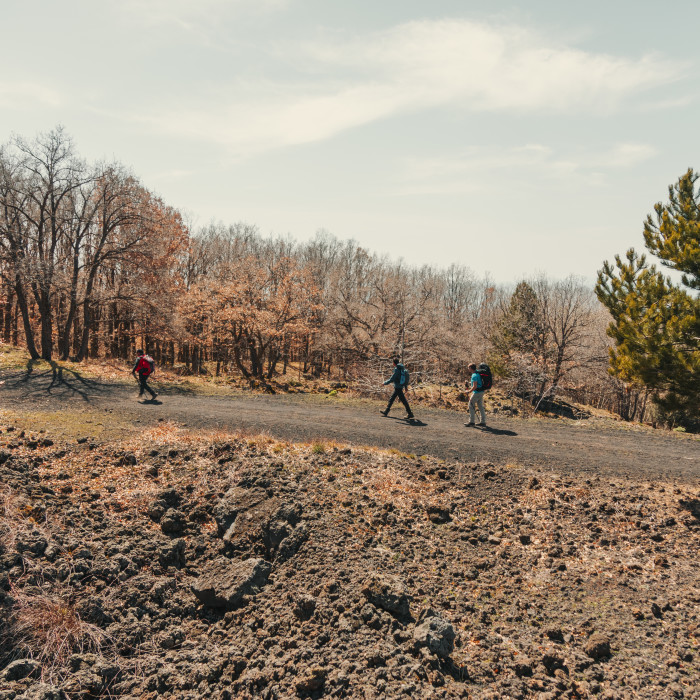 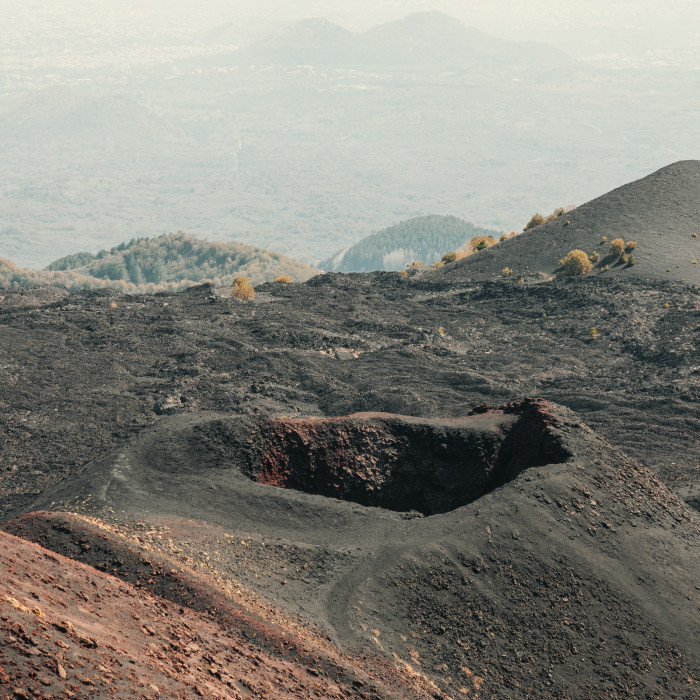