AROUND THE WORLD ON FOOT

The story of Nicolò Guarrera, who left looking for questions. His name is Nicolò Guarrera, but everyone know him as Pieroad. He’s from Veneto, born in 1993, and has been walking for some time now. Shortly after the first lockdown he started heading west. With him he had some clothes, a cell phone, a trolley with the essentials for living and a smile open to the world.

Grinding kilometers at a slow pace, Pieroad aims to travel the world on foot, savoring its humanity and perhaps finding some alternatives to the frenetic rhythm of modern life. We at Ferrino have welcomed him into our team by choosing to support Pieroad on his long journey. To date he has traveled over ten thousand kilometers and is now in South America. The journey is still long, but it is slowly taking place, encounter after encounter, and one step at the time.

My life has been a constant change, so now I have chosen to be a pilgrim for a longer period of time. I decided not to travel, but to live a part of my life walking, as a nomad. I'm chasing some questions, not so much to answer them. I am looking for that state of mind that their search entails because, although tormented, it is the one in which I find the most sense.

Walking is my act of freedom. I feel the need to get closer to an essential dimension of life, and walking is the most human way to do it. It is the only totally human way to move. Walking means living the route slowly, opening up to contamination because more attention is paid to details and change. You get curious, then you begin to care, this is a great way to take an interest in the facts of life.

And then, let’s think about the satisfaction of being able to do it on foot. It is a slow, stubborn and tiring construction of meaning that I nurture every day. I feel inside myself its importance and value, not the price.

Yuo left shortly after the first lockdown… A difficult choice or an impulse of freedom?

I would say a long-considered choice. I had already decided before the Covid-19 pandemic broke out. Two weeks earlier I had quit my job and set May 3rd as the departure date. The pandemic then complicated things.

When, in the summer, the situation improved, I reflected on what to do. I also thought about going back to work and postponing the project for a year, then I decided to take a risk and on August 9th I left.

Slowness is one of the researches of this journey. If a second wave of the pandemc came and caught me with a lockdown, I would have stopped, I would have waited, and in the meantime I would have tried to experience the place I had happened to be and the stories it had to tell. It was worth the risk. Furthermore, my head was already set on that type of life, I was projected towards long walks and changes of landscape. Postponing a one-year parenthesis would have required a mental effort that I had no intention of taking.

How did you chose the route?

At first I was thinking of heading east, towards the Balkans and Turkey. However, the leap seemed too big to me, both in cultural and bureaucratic terms. Going west instead meant starting to extend the comfort zone gradually, spending the first three months between Italy, France and Spain. Countries "close" to us in all senses and easily accessible. I could have followed the road network of Santiago and could counted on the reception facilities along the way and the company, which I hoped I would meet. Also I didn't have to do any kind of visa, which meant that if a second lockdown came, I could stop without fear of deadlines. It was like choosing to travel towards something known, to slowly approach the unknown.

You have foreseen 4 years of traveling, do you ever feel alone imagining yourself away for so long?

I never feel lonely, because being alone means feeling alien to a context. The challenge is to feel at ease in ever new situations. Rather, I feel nostalgia. Nostalgia that I use to write and to give even more value to what I left at home, to what I sacrificed to make my dream come true.

What do you mean when you say “sacrificed”?

For me it has a precise value, it means becoming sacred. The bonds I have have become sacred to me, even more so by physically distancing myself from the people I keep them alive with. When I return I will reap the fruits of this sacrifice and friendships and family bonds will have an even greater value than when I left.

Talking about bonds, how did your family and friends reacted to your choice?

My friends were ok with it: some of them expected something like this, others were present during the period in which I was incubating the idea so they were prepared. Everyone was curious about the details.

In my family it was obviously different, but my parents are of a truly out of the ordinary wisdom and after asking me a few days to think about it they said that it was fine for them and indeed, they would have liked to be part of this project. They asked me to regularly keep in contact, where possible, and to take out a normal medical insurance. And then they told me: we are worried, we are your parents and even if you are an adult we still feel responsible for you, but if you are happy, we are happy too.

To build your experience, did you ask advice from other travelers who have experienced similar emotions?

I studied a lot, starting from the people who had done it before me. A handful of people did it (fewer than those who went to the moon to be honest!). I have read the books they have written, their sites/blogs and collected information on their routes. Then I looked for those who had made trips to those places, even by other means of transport, and I contacted them via social media to collect other ideas. The goal was twofold: to know in depth where I would be passing through and to create a network of contacts on which I can rely.

What about the logistics?

I worked on the routes, on the itineraries, putting in what I wanted to see and aligning the points according to a route that made sense. At this stage I studied altitudes, distances between inhabited centers, which visas I would need, where social tensions were dangerous and especially the seasons: I did not want to go to Southeast Asia with monsoons or cross the Australian outback in the middle of summer. One step at a time the journey took shape and after several months I "returned home", drawing the last routes from the Slovenian border to my city. It had a strange effect on me, I think when it really happens it will be very intense.

Traveling brings with it good and bad moments, have you already found yourself experiencing moments of great concern?

There is a common thread that unites all the countries I have been to: the painful attention of the population to the environment. From Italy to Peru, with some differences but no one excluded. I do not dwell on specific observations or the consequences that we all know. Diversity is a figure of beauty and the diversity of life forms on earth is one of the most beautiful things that is disappearing faster and for which there is no hope of recovery. Every time I see it, I experience a moment of disarming ugliness because I realize that we are losing this beauty due to laziness: no one wants to give up or sacrifice some comforts to make a contribution.

What about the most beautiful moment instead?

A moment of hospitality. It was my first night in Ecuador and was in the Tumbaco pueblo on the outskirts of Quito. I was headed there because a guy would host me. That night it was raining and I kept wandering through the streets looking for David’s home, the guy who offered me a bed. I still didn't have the local sim card, so I couldn't even ask for information. Then, I managed to find the gate. I rang, but got no answer. The gate was open, so I went inside. There was also nobody inside. I entered the house, all turned off. I looked around until I found a note on the table: “Hi Nico, sorry but I was held up at work, unfortunately I won't be able to be there by the time you arrive. I left the door open for you, make yourself at home. Shower and bed are at your disposal, the pantry is above the kitchen. Take a rest, see you one of these days in Quito!”

I slept like a baby that night, I don't think there's anything else to add.

We let you go back to your journey, but first tell us the most beautiful place you have walked so far...

Canyon del Pato and Atacama desert. But I'll tell you about the first one, because Atacama is already well known. Rio Santa has carved out this canyon which winds from Caraz, a pueblo in the Peruvian Andes, to the coast. The landscape, needless to say, is gorgeous. Imposing rocky massifs stand proud above the river, they have steep walls that are colored red, gold, black, white and grey according to the minerals trapped there millions of years ago. The watercourse rumbles gently and widens into minute open spaces, the vegetation is rich along its sinuous banks and offers shelter from the heat of the sun. There are inhabited centers, more than villages: small groups of houses where I can get supplies of water. I remember that on the third day, in the morning, I couldn't go on. I would stop by the roadside laughing alone at how beautiful the landscape was. There were mango trees around white waterfalls and the glimpses that opened around every curve were a majestic sight. I even wrote down the number of the kilometer where I saw the most beautiful glimpse, but this is a secret 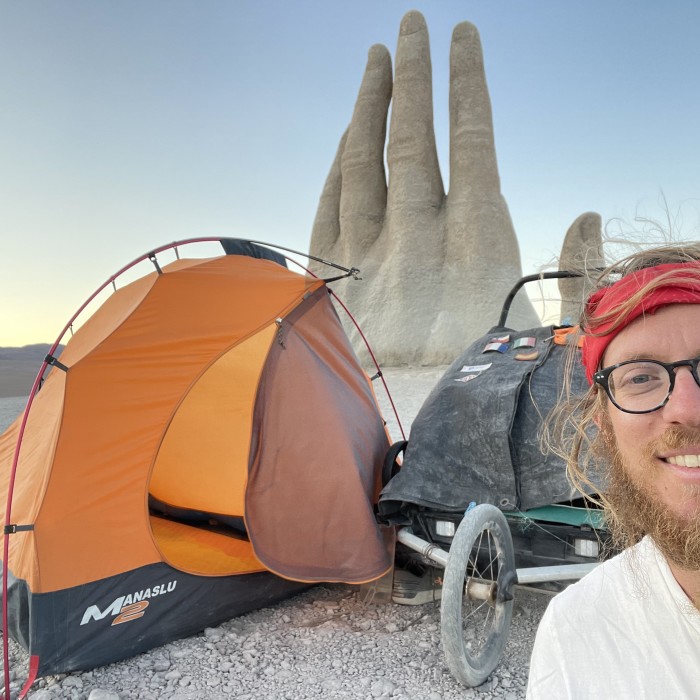 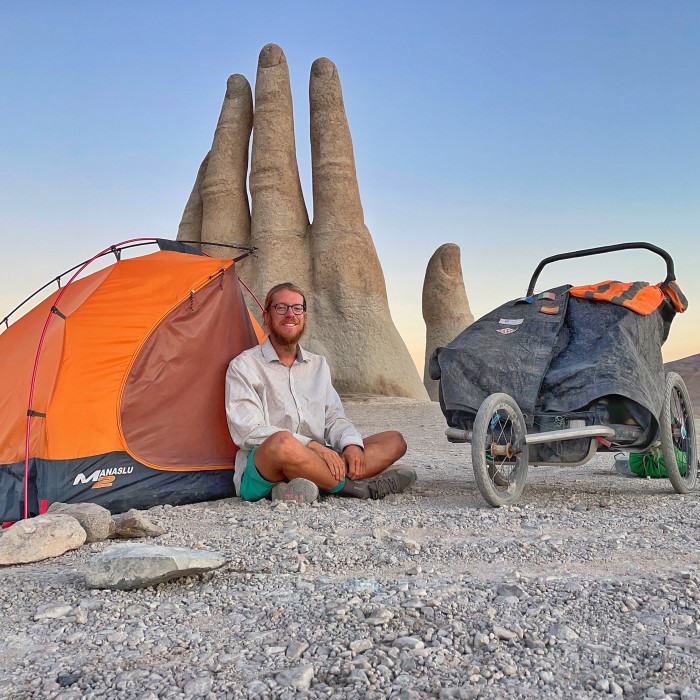 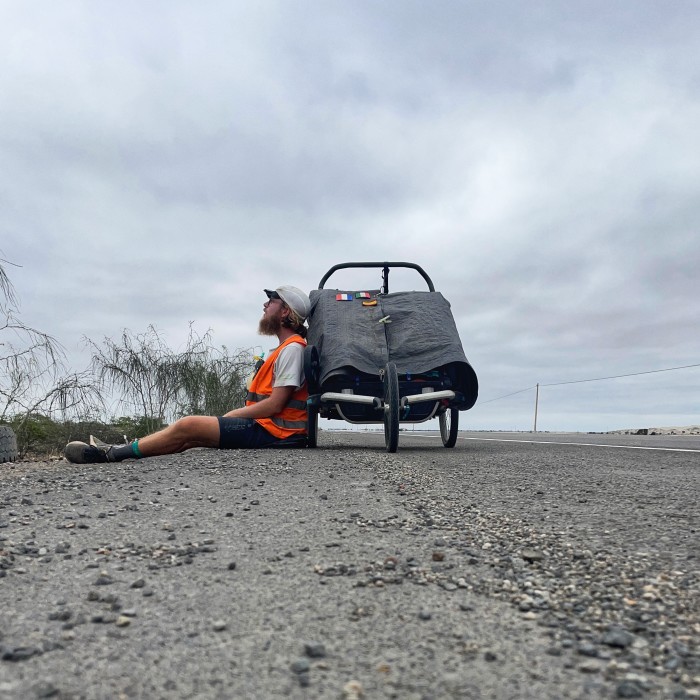 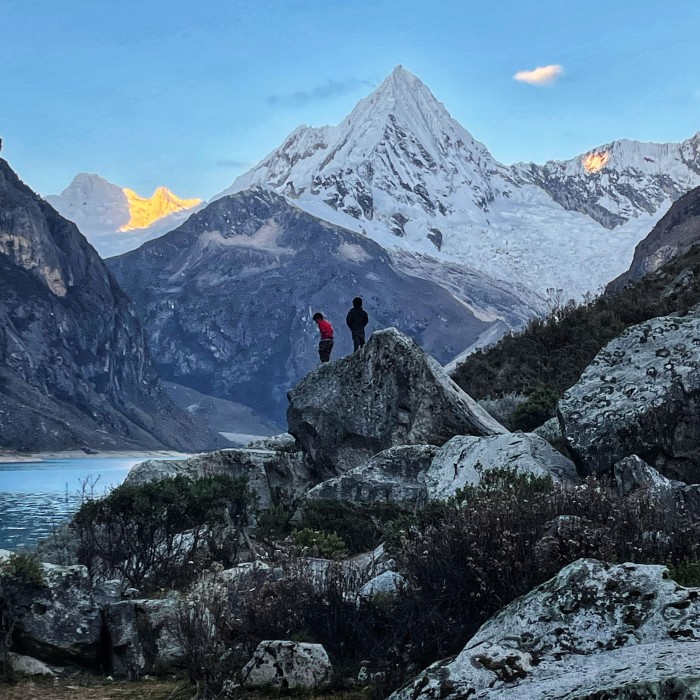 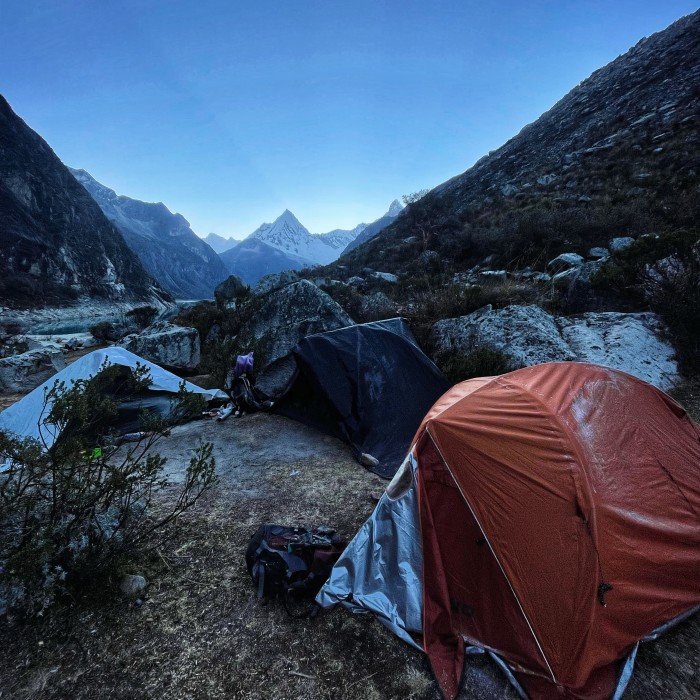 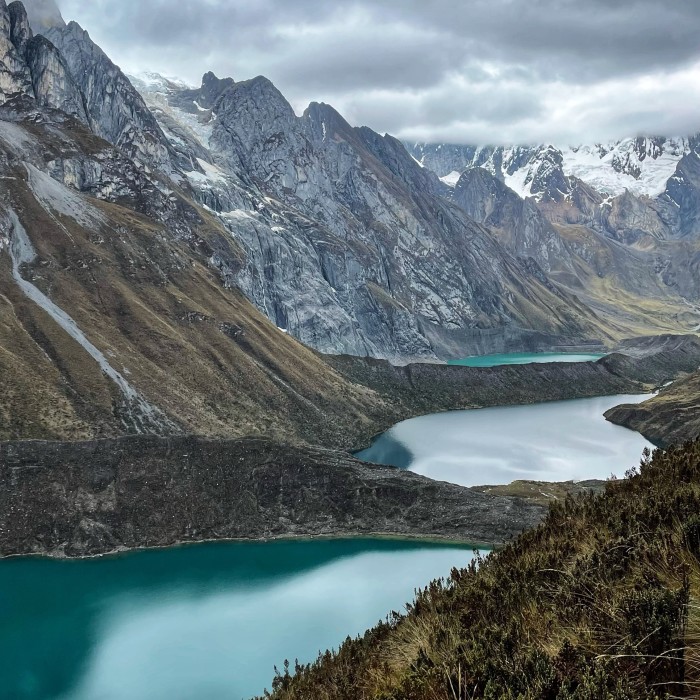 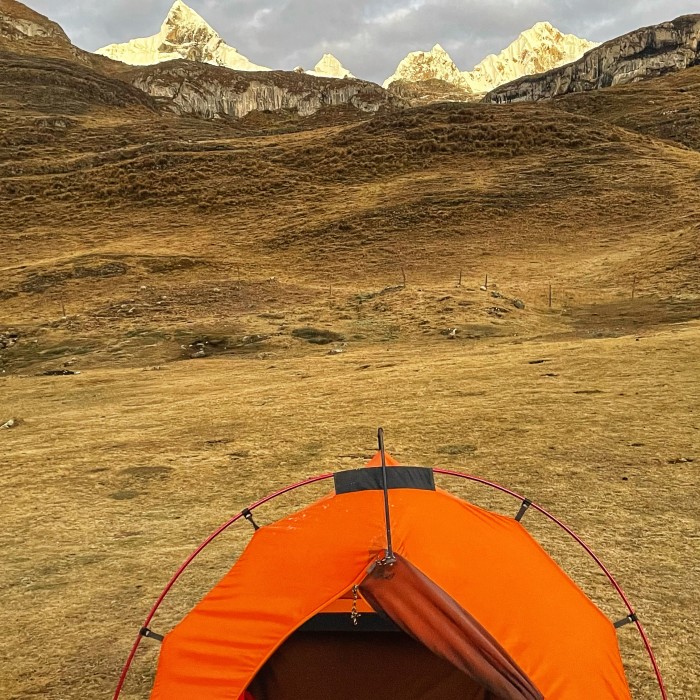 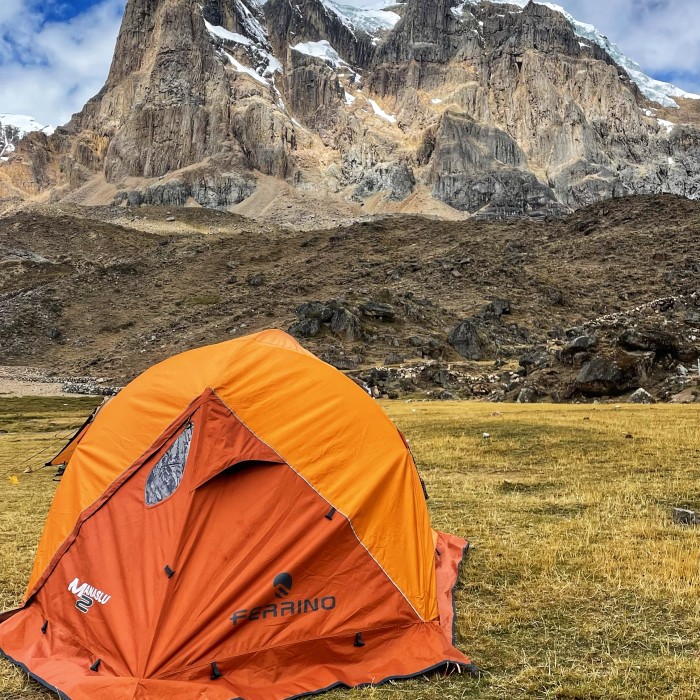